MÅNESKIN ARE COMING TO PRAGUE’S O2 ARENA AFTER A HUGE SUCCESS AT ROCK FOR PEOPLE HOPE!

After climbing international rankings and treading the stages of the main European Summer Festivals, Måneskin announces today the “LOUD KIDS ON TOUR”, scheduled for 2023, which will see them perform in the most important European cities, including Prague in cooperation of Rock for People Concerts and SodaPop Concerts. With over 3,4 billion streams on all digital platforms and more than 43 million monthly listeners on Spotify, Victoria, Damiano, Thomas and Ethan will set again foreign audiences on fire with a tour including a show in Prague, where they will perform on May 14, 2023, in the O2 arena.

TICKETS:
All tickets purchased for the original date of the concert in the GoOut network remain valid for the new date in the STANDING sector. Tickets for the new date at the O2 arena will be on sale from Friday 25 March, from 2 pm in the Ticketmaster and Ticketportal networks.

With their raw, energetic and distorted sound, Måneskin are taking rock’n’roll back to the top of the World’s charts, perfectly mixing it with contemporary tastes.
Twenty-year-old Victoria (bassist), Damiano (vocalist), Thomas (guitarist) and Ethan (drummer) started out as buskers performing in the streets of Rome in 2015 and, just a few years later, conquered the world, becoming one of the most popular rock bands of the new generation.

On July 15, 2021, the video for “I WANNA BE YOUR SLAVE” premiered worldwide on YouTube, topping 6.7 million streams in just 24 hours, becoming a hit song in 67 countries and climbing to #1 on YouTube Italia and to #20 on the global top artists chart.
Måneskin have broken a number of unprecedented records, peaking to #1 on the Spotify Global Top 50 Chart with “Beggin’” that, together with “I WANNA BE YOUR SLAVE”, cracked the UK Singles Chart – both songs in Top 10 – thus becoming the first Italian band in the history of music to crack the UK Top Ten Chart with two singles at the same time. 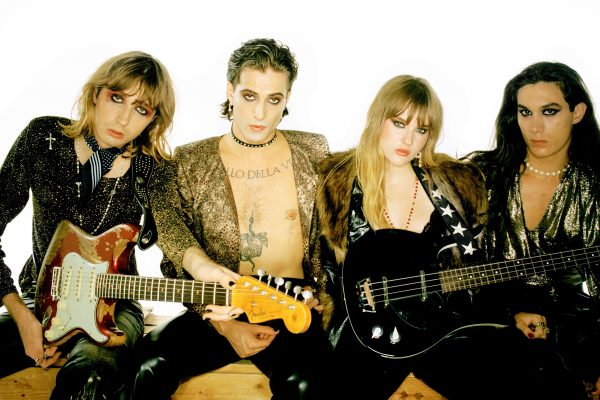