Due to the continuing uncertainty and the still unclear progression of the situation regarding Covid-19, Neck Deep made a difficult decision to cancel the upcoming Prague show.
Neck Deep are looking forward to see all their Czech fans at Rock for People 2022, where they will perform on Thursday, June 16.
Tickets will be refunded in full at the place of purchase.
We apologize for the inconvenience and thank you for your understanding.

On the heels of the trio of records that turned them from underground heroes to breakout stars, All Distortions Are Intentional is the biggest and boldest step yet in the creative evolution of Neck Deep.

No mere collection of songs, All Distortions Are Intentional is conceptually rich, with themes of disconnection, existential confusion, and the search for meaning. The album tells the story of a loner named Jett, who lives in a place dubbed Sonderland, a combination of “Wonderland” and the somewhat obscure word “sonder”: the realisation that each random passerby is living a life as vivid and complex as your own, with their own ambitions and worries. “It’s that strange existential realisation that you are not the entire world,” explains singer Ben Barlow. “Everyone around you feels and lives the same way that you do. You’re just an extra in their story.”
The aforementioned concept was born following the writing of lead single ‘Lowlife’, which welcomes fans into Sonderland alongside Jett and Alice. Jett feels disconnected and disillusioned, until he falls in love with Alice. But even this new relationship brings its challenges; Jett is a victim of limerence – the only thing he loves about the world is this person. The songs explore Alice’s view of Jett, as well, as a story unfolds that is ultimately about the importance of meaning and purpose for each and every individual.

As Barlow shares, “Modern music is so much based around ‘the single’ and writing a record isn’t held in nearly the same regard as it used to be. All Distortions Are Intentional presents a whole story, where there is meaning from every angle of it,” the singer continues. “All of our records have their themes, but I wanted to create characters, scenes, a world, and have it mean something in the real world, too.” Although the songs on All Distortions Are Intentional are told through the lenses of characters, they are also uniquely reflective of the lives that each member of Neck Deep has lived. “Writing ‘Lowlife’, it was like I was tapping into this part of my own personality, my own psyche” shares Barlow.

To create ADAI, Neck Deep enlisted the talents of Grammy nominated A-List producer, Matt Squire (Panic! At The Disco, Ariana Grande, One Direction), and tucked themselves away at the world famous residential studio, Monnow Valley (a recording home for the likes of Oasis, Led Zeppelin and Queen in the past), in the gorgeous but remote Wye Valley in the heart of the band’s native Wales. The decision to create the album ‘at home’ was an important one; on the eve of what’s certain to be Neck Deep’s greatest exposure to the world yet, it’s a grateful and decisive acknowledgment of where they’ve come from, both literally and figuratively.

Moreover, ADAI marks an epiphany of true self-belief for its creators: “Everyone wants to be seen as good at what they do, as creative, interesting, ambitious,” Ben asserts; “That’s what we wanted, for people to see that we are more than just some guys in a band. We truly lived and breathed this album, and wove unique perspectives, storytelling, and ideas into its fabric. We have crafted a sound that is ours, it is totally, unapologetically Neck Deep.”
All Distortions Are Intentional is the follow up to 2017’s, ‘The Peace And The Panic’, a transatlantic Top 5 album. 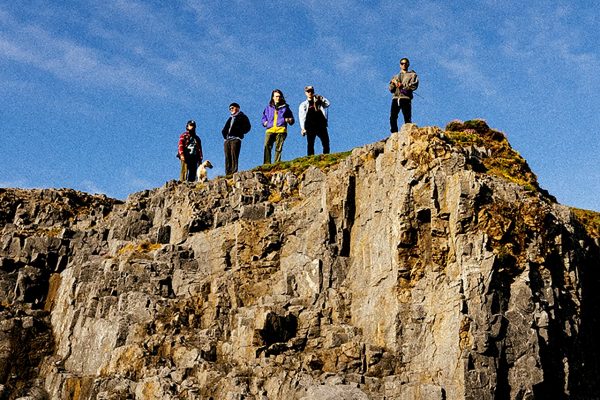