‘Don’t You Feel Amazing?’ is a snarling, swaggering arena rock album that sees St. Albans mob Trash Boat explode from the underground world of anthemic post-hardcore. “We’ve got everything to win and nothing to lose,” starts vocalist Tobi Duncan. “That’s the energy of this music.”

“I want to make everyone feel the way this album makes me feel, which is amazing” he continues. The record’s 13 thundering tracks might deal with pain, addiction, sexuality, politics and absolute fury but there’s a scrappy sense of hope to the whole thing. “It’s about bringing all these topics into the realm of the normal,” he offers, wanting to change things for the better. Despite the attention-grabbing nature of Trash Boat’s third album, they’re not interested in just making headlines. “I want conversations,” Tobi explains and ‘Don’t You Feel Amazing?’ is the starting point.

Formed in 2014, Trash Boat’s debut album ‘Nothing I Write You Can Change What You’ve Been Through’ saw the band wanting to play as fast as possible while 2018’s ‘Crown Shyness’ expanded that world of pop-punk inspired post-hardcore. “I just love that feeling of standing in front of 1000s of people who are all there for the same reason,” says Tobi and for years, Trash Boat provided the perfect soundtrack to chaotic shows that existed “as close to violence as humanly possible while knowing that everyone is there to take care of each other”.

With countless sold-out headline tours and festival slots, “we achieved what most couldn’t,” starts Tobi. “We were very much a successful band but I think we got as far as we could go with that sort of music. And it wasn’t enough.”

Rather than a continuation, ‘Don’t You Feel Amazing?’ is a “clean slate. We didn’t want to deviate away from what came before because we’re embarrassed. This stuff is just objectively better.” It’s not directly inspired by anything in particular but there are flashes of the music Tobi’s older brother used to play while he was driving him to school in his beat-up Volkswagen Golf – Muse, System of a Down, Metallica, Nine Inch Nails. “We wanted to explore different vibes, we went with our gut and we ended up with tracks that make us feel more than anything we’ve done before.” Take the title track, a hefty, hedonistic unapologetic disco-rock song, “it’s just so groovy, thick and sexy. Every time I listen to it, I can’t believe we wrote it.

Work started on ‘Don’t You Feel Amazing?’ two years ago and a bulk of it was recorded during an intense two-week stint in the studio but the band were still putting the finishing touches to it when ‘Silence is Golden’ was released in April 2021.

“The whole point of this album is to be bold,” explains Tobi. They didn’t want to regress, rather forge ahead wherever the urge took them which resulted in tracks like the firestarting, nu metal stomp of ‘Alpha Omega’.

Lyrically as well, Tobi was craving a more direct path to his audience. Instead of filling the songs with cryptic metaphors and references to literature like Trash Boat’s first two records, ‘Don’t You Feel Amazing’ sees him deliberately honest, succinct and bold in three words or less.

There’s the furious ‘Alpha Omega’ featuring an appearance from rapper Kamiyada+. The track was written about an injury Tobi sustained as a 15-year-old kid that ended his dreams of being a professional athlete and left him with open nerves rubbing on bone (unfortunately as painful as it sounds). A crippling addiction to Oxytocin followed once he found out how severe and permanent the damage was. In the future, he’ll probably lose his leg and because of it, every aspect of being in this band causes him physical pain. “That song was just frustration. I want people to be able to vent in ways that they know they can’t in real life,” he explains.

With a similar explosion of pent-up rage, ‘Science Is Golden’ is an emotional reaction to overwhelming political turmoil. He doesn’t want Trash Boat to be Rage Against The Machine but “I see such blatant and disgusting infringements on human rights,” that he couldn’t stay silent. A toe in the water, “it’s an attempt to give the political element of our daily lives a bit more of a voice.”

‘He’s So Good’ on the other hand, is a “fucking cool punk rock song that just happens to be written by a bisexual man, that is unapologetically bisexual.” In interviews, Tobi will often get asked leading questions about being the victim of homophobia but, as he points out, “I’m at 6ft, 170-pound confident, white Southern English guy,” so of course he hasn’t. “I’ve walked through my life with the utmost confidence in my sexual expression. What difference does it make to anyone else on the planet how people present or who they love?”

Still, he understands that there’s not many queer frontman in rock so is happy to take on the mantel of “an LGBTQ+ punk icon, if people want to follow my energy. I’m confident that no one can tell me who to find attractive, so I’ll wave the stop giving a fuck/do whatever you want flag. I feel that’s the right way to be.”

He hopes that blistering track makes people “feel included, heard and confident in their gender expression or sexuality.” Its message of “just express yourself and do whatever you want,” is echoed across the album. As Tobi explains, “there are no rules to this game”.

‘Don’t You Feel Amazing?’ is a very different Trash Boat album but as with everything the band have done, it sees the band being as honest as possible. As Tobi explains, “people put on performances all the time because they know it will give them clout and money, but it’s all an act. This album is just who we are. It’s real, it’s raw, it’s vulnerable, it’s bold and it’s sexy.”

Trash Boat started in the aftermath of sweaty hardcore shows at London’s The Underworld. Tobi “saw the chaos and I was hooked.” He wanted some of the action for himself.

And while the ambition has grown, that initial spark is still the driving force behind Trash Boat. “I just want to be part of something bigger than myself, that makes it not about me,” Tobi says. “We just want to play the sweatiest, most energetic shows possible. We want to reach the biggest audience possible and we want that audience to feel something real.”

“I want ‘Don’t You Feel Amazing?” to be the biggest album ever,” he continues with a grin. “I want to pack out stadiums. I want to be a big fucking rockstar… but I’m not going to change myself just to do that.” 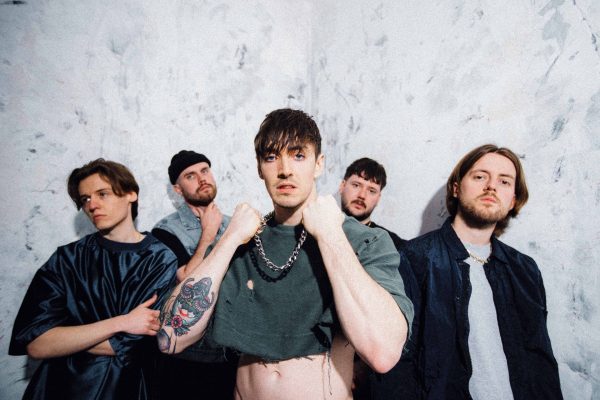